Through the ages each generation has left their footprints either in the form of potshards, building ruins with shadows against wall remains, cave-paintings in blood or brownish-red.  Monuments from the past… It’s February 1904. The hot Lowveld sun is beating down harshly on the brown earth.  And eleven rows of footprints walk towards an exciting future. Our school!

The overwhelming feeling of pride and humility fills every vein of me, when I think that we have the privilege to be witnesses, 116 years later, of the success of White River Primary!  After much research and detective work in a treasure chest of documents and Year Books it is a privilege for me to reveal and share small pieces of interesting information about our school.  It was the easiest thing in the world to get lost in the history and paint word pictures on paper.

Just a month after the official opening of the “government school” with Mr G.E. Davies as the principal another 27 pupils walked into the simply built school in Peter Graham Street.  Not only was it a place of learning, but the rear of the building had to be the residence of the first teacher and his family. A dining hall/kitchen that made up part of the building was often used as a gathering place for various churches, the White River Farmers, Association used it until late at night while discussing the wind and rain and joyful dance parties were often hosted. A true fortress of culture!

The first desks came all the way from Burger Camp School in Barberton and the ground floor added to the unique ambiance.  It was with great excitement that I read the Inspector’s Report dated 16 September 1904, “School Room and Teachers Quarters… in a good state of repair but some allowance should be granted to the Principal in order to enable him to do such work as smearing the floor.”    Be that as it may, in March 1906, wooden planked floors were put in. The children were really happy as the got an unexpected week’s holiday.  On 17 September 1904 the first trees were planted and it quickly became apparent that larger facilities would be needed with the growing number of pupils.  A bigger school was built in 1926 with 3 classrooms and soon after that even more buildings were erected. A new wing with 3 more class was built in 1931.  At the completion of this building phase the then school commission decided to name the new wing after the serving M.P.C – Mr Raubenheimer.

The growing pupil numbers grew hand-in-hand with the school’s distinctive status… and on 1 August 1929 the school was proclaimed a P111 school, which meant it was a school with more than 100 pupils. During the Crown Colony years the pupils were educated in English and only Biblical History was taught in Dutch.  In his first inspection report, dated 17 November 1905 was elated by the fact that the pupils were able to display their knowledge of English in so short a period. This language situation could not continue for much longer and on 20October 1908 issued the following report: “ … in deze school is het medium van onderwys Engels. Volgens de eis van de tegenwoordige wet en cirkulaire No 1 1908 moiet’t medium hier Hollands zijner.  De onderwyzer, …, moet  Zorgen dat z’n school geleidelik kompt op het standpunt van de Wet.” With his next visit in September 1909 Inspector Mills could report: “Dutch has now definitely been adopted as the medium of instruction.” Just as a point of interest – Hollands was replaced by Afrikaans as a school subject on November 1917 and on 11 April 1926 a lady teacher was appointed to teach English to the first 11 English speaking pupils.

In those days transport was a rather slow process and it wasn’t unusual for children to walk 5 or 6 miles to school. As a result of the transport problems school attendance wasn’t the best! To try and improve the situation mules and carts were introduced.  In February 1928 the first bus service was initiated after the Plaston School was centralized with this school. The need for boarding was realised as early as 1918.  But it was only in 1936 that the first hostel with a living quarters and outside rooms was opened.  The demand for boarding quickly grew and the original old school building was used for this purpose. Is it not amazing that the circle entrance was designed by the well-known South African artist – Pierneef! History never stands still.  In the third term of 1968, the school, as it stands today, was taken into use. Our School Song is so apt: … as White River’s streams flow from distant thickets, so our school has continued to grow  from the thickets of the past.” White River Primary’s striving towards true parallel medium education, high educational standards and a rainbow of extra-curricular activities is a fantastic example of true ethos and character.

Great festivities took place in White River when White River Primary celebrated its centenary on 6 February 2004.  The day was one of endless fun including a procession through the town, wheel-barrow races, tug-of-war competitions and a picnic on the sports’ fields to end off the historical day.

Mr van der Riet, staff and pupils all have reason to be proud of this Lowveld treasure.  Not only does White River Primary fill a person to the roots with amazement, but also with the sure knowledge with a sense of where one is going.

Many academic sculptor’s chisels have helped to form and hone us into the art form we are today. These names roll like the credits on a film, undoubtedly with stories and anecdotes. Some of these sculptors from the past are: 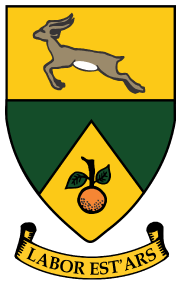